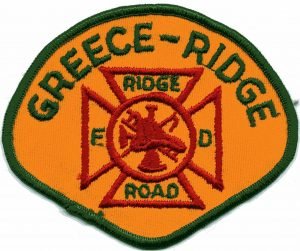 In 1922, the community centered at Ridge Road and Long Pond Road was a largely agricultural hamlet known as Ada. The Greece Ridge Fire Department was incorporated on August 3, 1922 with the Greece Ridge Fire District being formed later that year, on November 25th.  The District would later become the Ridge Road Fire District. The first meetings were held in the St. John’s Church rectory until being moved to the Town Hall in 1925. At the time, the Greece Town Hall was located on West Ridge Road, between Long Pond Road and Mitchell Road.

The first motorized fire apparatus was a Pierce Arrow pumper that was purchased in 1922 to augment the soda acid chemical cart and hose cart that local merchants had been using to extinguish fires.

The first firehouse opened in 1924 on the corner of Ridge Road and Long Pond Road. By 1930, the first paid fireman was hired; a man by the name of Frank Siebert. The firehouse was remodeled and included an apartment for Mr. Siebert. He was on duty 24-hours a day, with about 8 hours off per week. During the 1930’s, the department found itself responding to a variety of calls and it was announced in January of 1933, that a First Aid class would be arranged for members. 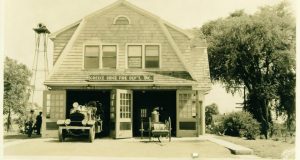 In 1935, the district purchased a second motorized pumper.  It was an American LaFrance and was the first of our trucks to be painted white. Legend has it that there was fierce but friendly competition between the North Greece and Greece Ridge fire departments and that the up-charge for selecting DuPont white paint over the standard red was an indication of pride in the fire company. The tradition of white trucks continues to this day, although the fierce competition has become more of a cooperative partnership over the years. 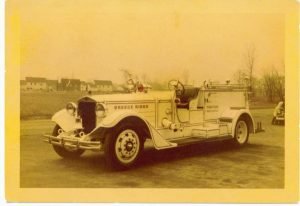 In the 1940’s the effects of the Second World War were felt in the district as they were throughout the Nation. Black out shades were used on the windows of the firehouse during meetings and firefighters received incendiary bomb training. Following the war, the Town of Greece saw a post-war expansion. Between 1945 and 1950, over 2,700 new homes were built in the town; most of them in our district. With the increase in population came a need for another apparatus, a 1948 Mack Pumper.  There was also an increase in calls and in 1947, the department responded to 52 alarms.

The 1950’s brought two-way radios and a fire telephone. Alarms would now be relayed from the Rochester Fire Dispatcher to Greece Ridge. The Greece Ridge fireman would then alert volunteer members through home radio sets. By 1955, yet another truck was purchased, bringing the fleet to four motorized apparatus. By 1958, plans were in place to build a new firehouse on Long Pond Road, just south of the Ridge. Frank Siebert retired in 1959 and the first civil service Firemen were hired later that year. The town increased in population by 90% between 1950 and 1960 with much of the District becoming developed.  The department responded to 126 alarms in 1959.

The new firehouse was opened in 1962 at 1299 Long Pond Road. This station still serves as our Headquarters, albeit with several renovations over the years. The Sixties were a time of great expansion in the Town. Population in the town continued to increase with the urban-suburban sprawl. With the success of the Eastman Kodak Corporation, the Ridge Road District saw increases in both residential and commercial properties.  This again brought more work and In 1968, a full night shift was added, resulting in 24-hour staffing by career personnel. With the increase in residential properties during the decade, a second firehouse was needed and in 1969, approval was obtained to build the Stoneridge Station.

The Stoneridge Station opened in 1971 to better serve the residents and shop owners in the eastern portion of the district. This station was staffed with one firefighter, 24 hours a day.  As the decade progressed, industrial development continued on a steady upward trend and the district became home to several shopping centers, nursing homes, and a hospital. In 1976, the First Aid program was improved and personnel began receiving training as Emergency Medical Technicians to provide 24-hour medical care and to assist the ambulance service with medical calls in the district. 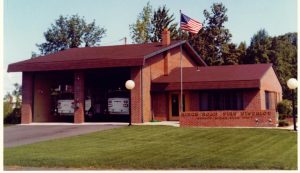 Through the 1980’s the community continued expanding, both in residential and commercial zones. Greece Ridge was a combination department with a strong volunteer force supplementing the paid firefighters. Even with this arrangement, staffing was at 24 paid firefighters by 1982. Fire responses consistently increased, as did emergency medical calls and by the early 1990’s our personnel were responding throughout the county for hazardous materials incidents.

While the 1990’s saw a decline in the local industries, there was a continued increase in work load for the district. A 300-acre business park was built along the Erie Canal and became home to the Democrat and Chronicle newspaper printing press, Ortho Clinical Diagnostics, and several other companies.

In recent years, changes in local industry have led to both a change and increase in the incidents we respond to. The Ridge Road Fire District is now home to various production, packaging, warehousing and healthcare outlets.  These facilities conduct business in all corners of the world and our personnel are always ready to respond to their needs. Of course, we are still here to serve our residents and small businesses and are better trained and equipped to do so than ever before. 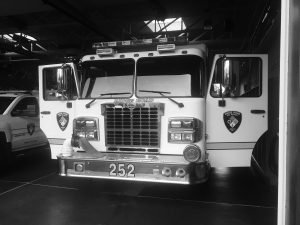 Day 4 of 4 today at the PSTF. All 4 duty groups have operated at the training facility with other organizations from Monroe County to practice emergency response and get used to interoperability. We are proud to be a part of the county in-service evolutions! ... See MoreSee Less

Call to make your appointment for the June 22 fitting station! ... See MoreSee Less

Thank you to Legacy for inviting us to your ceremony! ... See MoreSee Less